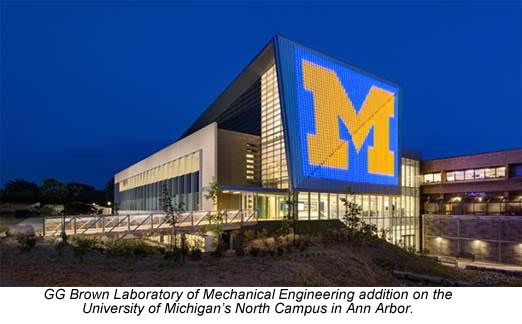 The Ultra-Low Vibration Lab is a part of the new Center of Excellence in Nano Mechanical Science and Engineering (NAMSE) – a recent addition to the G.G. Brown Laboratories on the North Campus of the University of Michigan in Ann Arbor.

Noel Perkins, former associate chair for Facilities and Planning with the Department of Mechanical Engineering, describes this addition as a “building-within-a-building”. The Nanoengineering Lab, located on the ground floor, contains eight ultra-low-vibration chambers for nanoscale metrology, mechanical, temperature and interference testing. 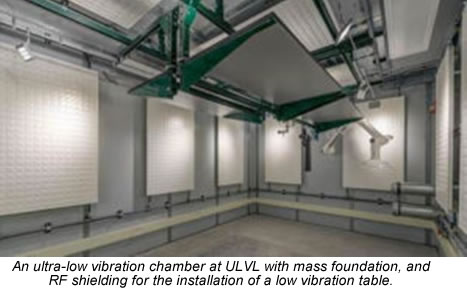 The chambers are structurally isolated from the balance of the building.  Vibration isolation tables are mounted on pillars that are part of an 8-ft-thick seismic mass, which is isolated from the chamber floors. Even researchers’ footsteps won’t disturb experiments. “With the emergence of nanotechnology and nanoengineering of the last two decades, a relatively small number of institutions and agencies have been able to construct facilities for ultra-sensitive measurements, and I know of none that are focused on the mission of a mechanical engineering department,” said Edgar Meyhofer, professor of mechanical engineering and biomedical engineering at the university.


Meyhofer, in conjunction with Pramod Reddy, a professor of mechanical engineering, and materials science and engineering at the University of Michigan, have been collaborating on nanoscale heat transfer, energy transduction and biomechanics research. Other researchers are utilizing the Nanostructures Lab to build artificial platelet cells for medical purposes and artificial neurons for advanced computers. While at the University’s Microdynamics Lab, the tiniest forces are studied, utilizing computational models that describe the mechanics of DNA and protein assemblies, and the behavior of viruses.

Since the opening of ULVL in 2014, two major scientific milestones have been achieved:
1)      Measuring heat fluxes at the nanoscale, thereby validating fluctuational electrodynamics;
2)      Establishing that light emitting diodes (LEDs) can be used to cool electronic devices in supercomputers.

Validating Fluctuational Electrodynamics
When heat travels between two separated objects, it flows differently at the smallest scales – distances on the order of the diameter of DNA, or 1/50,000 of a human hair. For example, heat radiates 10,000 times faster at the nanoscale. Researchers have been aware of this for decades, but they have not understood the process. Now, at ULVL, researchers have measured how heat radiates from one surface to another in a vacuum at distances down to 2 nanometers.
"We've shown for the first time, the dramatic enhancements of radiative heat fluxes in the extreme near-field," said Reddy. "Our experiments and calculations imply that heat flows several orders of magnitude faster in these ultra-small gaps."
Reddy and Meyhofer led the work.  A paper on the findings was recently published in the international journal of science, Nature.

In the middle of the last century, the Russian radio physicist, Sergei Rytov, proposed a new theory called “fluctuational electrodynamics” to describe heat transfer at smaller than 10-micrometer distances. Since then, research hasn’t always resulted in supporting evidence.

“Experiments were undertaken in the 1990s and early 2000s that tried to test these ideas further, and they found large discrepancies between what theory would predict and what their experiments revealed,” explained Meyhofer.  Because of the sophistication of the University of Michigan’s new laboratory, the researchers say their findings close the case, and Rytov was right.

The ULVL chamber was custom designed for performing nanoscale experiments, so precise, that they are sensitive to mere footsteps. The vibration isolation system in the chamber consists of a seismic mass and a sophisticated low-vibration table, which reduces vibrations from outside, and inside, such as mechanical vibrations associated with heating and cooling systems, or elevators.

The chamber limits acoustic noise, temperature and humidity variations, as well as radio frequency and magnetic interference. “Our facility represents the true state-of-the-art,” Meyhofer said.  “When creating nanoscale gaps, such as those required for our nanoscale heat radiation experiments, the slightest perturbation can ruin an experiment.”

In the chamber, the researchers use custom-built “scanning thermal microscopy probes” that allowed them to directly study how fast heat flows between two surfaces of silica, silicon nitride and gold.  The researchers chose these materials because they are commonly used in nanotechnology.

For each material, they designated one sample (the planar substrate) that would be heated to 305°F.  Using a probe, they coated the tip with the same material, but kept it connected at the base to a thermal reservoir that was maintained at a cooler 98°F. The sample and the probe were slowly moved, together, in small steps, beginning at 50 nanometers until they were touching.  The temperature of the tip was measured at regular distances (gaps) between 2 nm and 50 nm. The cause of the rapid heat transfer, the researchers discovered, was the result of an overlap of the two sides’ surfaces, and evanescent waves, both of which carry heat. A phenomenon present in nanoscale gaps.

“These waves reach only a small distance into the gap between materials,” said Bai Song, a former graduate student in mechanical engineering and one of the lead authors. “And their intensity at the extreme near-field is enormous compared to the electromagnetic waves at larger distances. When these waves from the two different devices overlap, that is when they allow tremendous heat flux.”


Cooling Supercomputers with Heat-Absorbing LEDs
LEDs with electrodes can reverse-cool adjoining devices a mere few nanometers away.  This approach could lead to new solid-state cooling technology for future microprocessors, which will have so many transistors packed into small spaces that current methods will be incapable of removing heat quickly enough.  "We have demonstrated a second method for using photons to cool devices," said Reddy, who co-led this work with Meyhofer. "The LED, with this reverse bias trick, behaves as if it were at a lower temperature.”

Measuring this cooling, and proving that anything interesting has occurred, is considerably complicated. To get enough infrared light to flow from an object into the LED, the two would have to be extremely close together, less than a single wavelength of infrared light. This is necessary to take advantage of near field or evanescent coupling effects, which enable more infrared photons to cross from the object to be cooled into the LED.

Reddy and Meyhofer had an advantage, as they had already been heating and cooling nanoscale devices, arranging them so that they were only a few tens of nanometers apart.  At this close proximity, a photon, that would not have escaped the object to be cooled, can pass into the LED, almost as if the gap between them did not exist.

These experiments became possible because the team had access to the ULVL ultra-low vibration laboratory, where measurements of objects separated by nanometers become feasible because vibrations are dramatically reduced.

The group proved the principle by building a minuscule calorimeter, which is a device that measures changes in energy, and putting it next to a tiny LED about the size of a grain of rice. They were constantly emitting and receiving thermal photons from each other and elsewhere in their environments.

"Any object that is at room temperature is emitting light,” Meyhofer said.  “For example, a night vision camera is basically capturing the infrared light that is coming from a warm body.”

Once the LED was reverse-biased, it began acting as a very-low temperature object, absorbing photons from the calorimeter.  At the same time, the gap prevents heat from traveling back into the calorimeter via conduction, resulting in a cooling effect.

This research could turn out to be important for future smartphones and other computers. With more computing power in smaller and smaller devices, removing heat from the microprocessor is beginning to limit how much power can be squeezed into a given space.  With improvements in the efficiency and cooling rates of this new approach, the team envisions this phenomenon as a way to quickly draw heat away from microprocessors in devices.  It could even stand up to the abuses endured by smartphones, as nanoscale spacers could provide the separation between microprocessor and LED.

Engineering a Solution for the Ultra-Low Vibration Lab
After the construction phase of the Center of Excellence in NAMSE was completed, a vibration survey was done on the Ultra-Low Vibration Lab chambers. The measurements demonstrated that even when a single vehicle was driving on a nearby street, the vibrations exceeded the NIST-A specifications necessary for the ULVL.

In order for the Ultra-Low Vibration Lab to be successful it was required to have a Vibration Criterion (VC) of NIST-A (1 µm, 1 – 20 Hz; 125 µm between 20 – 100 Hz). The VC criteria were developed in the early 1980s by Eric Ungar and Colin Gordon. They were originally developed for use in the semiconductor industry but have found application in a wide variety of technological applications. The NIST-A criterion was developed for metrology but has gained popularity within the nanotechnology community.

The recommendations to achieve the required specifications included controlling traffic on nearby streets in direct proximity of the new building addition, as well as upgrading the planned pneumatic vibration isolators on optical tables with Negative-Stiffness isolators, designed and manufactured by Minus K Technology.
The University of Michigan ordered seven customized tabletops and 31 custom Minus K Negative-Stiffness vibration isolators with pedestals provided for the eight Ultra-Low Vibration Lab chambers.

Negative-Stiffness isolators employ a unique and completely mechanical concept in low-frequency vibration isolation. They do not require electricity or compressed air. There are no motors, pumps, or chambers, and no maintenance because there is nothing to wear out. They operate purely in a passive mechanical mode. 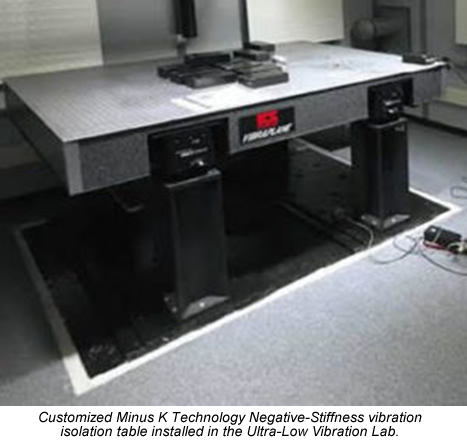 “In this vibration isolation system, vertical-motion isolation is provided by a stiff spring that supports a weight load, combined with a Negative-Stiffness mechanism,” explained Dr. David Platus, President of Minus K Technology. “The net vertical stiffness is made very low without affecting the static load-supporting capability of the spring. Beam-columns connected in series with the vertical-motion isolator provide horizontal motion isolation. A beam-column behaves as a spring combined with a negative-stiffness mechanism.”


Record-Low VC-M Vibration Level
The final vibration survey by internationally recognized vibration and acoustics consultant Colin Gordon Associates (CGA), after installation of the customized Minus K Negative-Stiffness isolators and tables, showed the measured vibration levels in all ULVL chambers from VC-K to VC-M at frequencies above 2.5 Hz. Vibration criterion (VC) curves are commonly used in the evaluation of the ambient vibration of facilities.

"VC-M is the lowest we have ever measured, though we weren’t able to measure below 2.5 Hz because our most sensitive sensor won’t go lower, due to sensor noise floor," said Hal Amick, Vice President of Colin Gordon Associates. The measurements by CGA revealed that the tables provide isolation between 1.25 and 160 Hz, at least 10dB above 2 Hz, 20dB above 4 Hz and 80Hz. This is remarkable, given the low noise environment in which these tables have to perform.