Electronic (especially tube) microgroove turntables, CD players, DVD players are sensitive to vibrations transmitted by solid paths. These vibrations lead (for example on the tubes) to microphonic effects which provide a kind of permanent false reverberation, a lack of precision in the transmission of information, or even less firmness, in the bass and the extreme-bass.

On turntables, these vibrations disturb the permanence of the stylus clearly reading the sides of the groove leading to distortion, instability of the stereophonic image, or even feedback.

With the mechanics of CD players, vibrations cause reading losses of the micro-pits engraved by the laser beam and additional interpretation by the auto-correlation routine which tries to reconstitute the missing information (by series of averages with multiple permeations) with the respect of the harmonic structure of timbres, the stereophonic image.Many accessories offer decoupling feet, shelves, bases filled with more or less exotic materials ranging from sand to reconstituted stone. In advanced technologies, isolation against vibrations use heavy mass or air tables to ensure the accuracy of the data recorded (i.e. electron microscope, epifluorescence, optical, magnetic resonance medical imaging system, laser interferometry). Minus K,  however offers a different type of table that is specialized for these industries offering  isolation that can go down to 0.5 Hz. for ultra sensitive machines in laboratories housed within buildings. 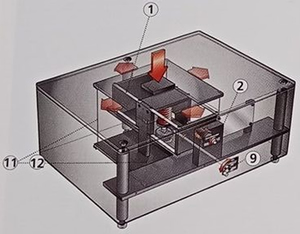 Thus, the negative-stiffness isolation table, developed by Minus K is designed for equipment placed on top to be protected from vibrations.  The isolator was hijacked from this usual application by some passionate audiophiles who noted a real improvement in audio listening better at low volume rather than at a high sound level.

After several weeks of testing, listening in different environments, we can confirm that this negative-stiffness system is really effective within a high definition sound system, undoubtedly providing greater general clarity throughout the spectrum, a feeling of general lightness in which the ambient music emerges much more robust. However, it is especially clear in all the extreme-bass, sub-bass and bass sectors that the differences are most noticeable with a markedly more articulation between the notes below 100 Hz.

Side stereo image, the separation of the performers from right to left, the unconditional stability of the soloist but above all the very precise in-depth layering (without the phenomenon of withdrawal into the fortés) immediately emerge from the ears as soon as a vinyl turntable is placed, (in particular, CD player / converter, preamplifier, especially tube amplifier) on the laboratory isolation system which acts both vertically and horizontally, which is much rarer.

Indeed, its design is very complex with adjustment of the stiffness in both planes as well as that of the vertical adjustment (by crank) based on the weight of the equipment placed on it, with a visual indicator of the optimal position.

Better than a long speech, the exploded view and the photos with the upper heavy plate removed reveal the complexity of the decoupling means implemented from an ultra thick steel frame with columns at four corners supporting two blocks (1 / 2) on which are supported the supports (3/4) of the four pairs of leaf springs (5/6) which keep suspended a cubic frame composed of the lower (7) and upper (8) plates. In the center, the coil spring (10) can be more or less compressed by turning the crank (9) depending on the weight of the device that is placed on the plate. The small steel columns (11/12) connecting the upper and lower plates (7/8) act in bending (when the plate is loaded) as springs against the vibrations, this time in the horizontal plane. 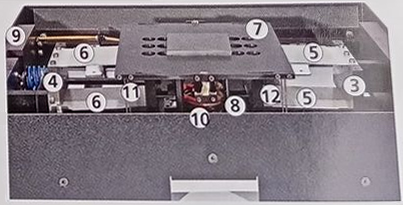 By design, this table acts equally well on vertical vibrations from bottom to top as well as lateral ones from left to right (and vice versa) naturally in the multiple combinations of the two.

In absolute terms, the price of 3,500 Euro may seem high, but when we examine the mechanical complexity, the number of precisely machined parts, the weight of the steels used and above all the real efficiency of this anti-seismic table first produced for laboratory applications, this appears to be fully justified, all the more so as the effectiveness is really audible. It is not a question of an illusionist act as too often with the decoupling feet of poor measurable or audible effectiveness, but indeed of a support of undeniable effectiveness.