By Patrick Roberts
The tunable microwave-frequency alternating current scanning tunneling microscope (ACSTM) can record local spectra and local chemical information on insulator surfaces, much like the conventional STM can do for metals and semiconductors. Spectroscopy in the microwave frequency range enables previously unattainable measurements on conducting substrates, such as the rotational spectroscopy of a single adsorbed molecule.

The technology was developed in the early 1990s by Professor Paul Weiss, the nano-pioneering director of the Weiss Group, a nanotechnology research unit of UCLA’s California NanoSystems Institute. The ACSTM’s single-molecule measurement techniques have illuminated unprecedented details of chemical behavior, including observations of the motion of a single molecule on a surface, and even the vibration of a single bond within a molecule. Such measurements are critical to understanding entities ranging from single atoms to the most complex protein assemblies.

“We use molecular design, tailored syntheses, intermolecular interactions and selective chemistry to direct molecules into desired positions to create nanostructures, to connect functional molecules to the outside world, and to serve as test structures for measuring single or bundled molecules,” says David McMillan, lead technician at the Weiss Group. “The ACSTM enables interactions within and between molecules  to be designed, directed, measured, understood, and exploited.”

The group examines how these interactions influence chemistry, dynamics, structure, electronic function, and other properties. Such interactions can be used to form precise molecular assemblies nanostructures and patterns, and to control and stabilize function. By understanding interactions, function and dynamics at the smallest possible scales, the group hopes to improve synthetic systems at all scales.

Understanding ACSTM
The scanning tunneling microscope is based on quantum tunneling. When a conducting tip is brought very near to the surface to be examined, a bias (voltage difference) applied between the two allows electrons to tunnel through the vacuum between them. The resulting tunneling current is a function of tip position, applied voltage, and the local density of states of the sample.

Information is acquired by monitoring the current as the tip’s position scans across the surface, and is usually displayed in image form. STM can be a challenging technique, as it requires extremely clean and stable surfaces, sharp tips, excellent vibration control and sophisticated electronics. For an STM, good resolution is considered to be 0.1 nm lateral resolution and 0.01 nm depth resolution.

Testing has shown how harmonic amplitudes in nonlinear spectroscopy with the ACSTM can be interpreted in terms of molecular motions, charging and electronic structure. The Weiss Group has used these nonlinearities to study the electronic energies of insulator surface states. 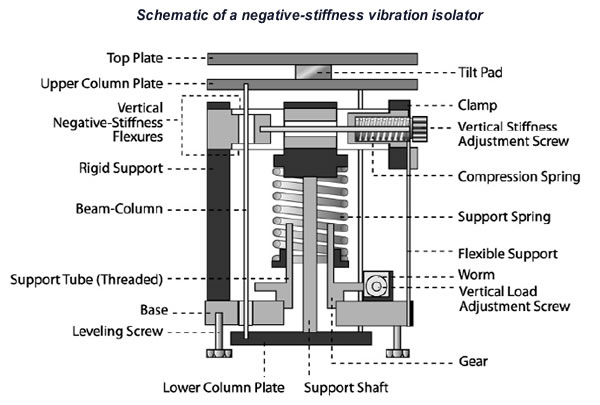 Vibration Isolation
Achieving these nanolevel chemical and spectroscopic data sets requires that the ACSTM be positioned in an ultra-stable operating environment. “The lab was using almost exclusively optical tables on pneumatic isolation,” says McMillan. “One of our big problems has been space constraint. We needed smaller pneumatic optical tables to fit. But as the air tables get smaller, their vibration isolation performance diminishes.”

Space was not the only issue; the lab was occasionally moved to different locations at UCLA. In 2009, the lab was on the sixth floor of a steel-structure building that had significant movement issues, which created low-frequency vibrations.

McMillan was originally interested in the negative-stiffness isolator because of reports that promised very good low frequency vibration isolation in a small footprint, making it much easier to place in a compact box for thermal stability. “I put it on a cyclic accelerometer and it performed outstandingly,” continues McMillan. “Much better than any other vibration isolation we had used before.”

Negative-stiffness isolators resonate at 0.5 Hz. At this frequency there is almost no energy present. It would be very unusual to find a significant vibration at 0.5 Hz. Vibrations with frequencies above 0.7 Hz are rapidly attenuated with increase in frequency. Air tables, as vibration isolation systems, deliver limited isolation vertically and less isolation horizontally. They can make vibration isolation problems worse, since they have a resonant frequency that can match that of floor vibrations. Air tables will actually amplify, instead of reduce, vibrations in a typical range of 2 to 7 Hz, because of the natural frequencies at which the tables resonate. All isolators will amplify at their resonant frequency, and then they will start isolating. With air tables, any vibrations in that resonant frequency range could not only fail to be attenuated, they could be amplified.

Also, transmissibility with negative-stiffness isolators is substantially improved over air systems. Transmissibility is a measure of the vibrations that are transmitted through the isolator relative to the input vibrations. The negative-stiffness isolators, when adjusted to 0.5 Hz, achieve 93 percent isolation efficiency at 2 Hz, 99 percent at 5 Hz and 99.7 percent at 10 Hz.