By Ewen Callaway
Whether it's an NMR or a two-photon microscope, scientists love toys - at least when they work. Sometimes the most mundane things bungle technology: environmental vibrations from cars driving by, central air conditioning, the voices of the operators, and even the ocean. As instruments become more sensitive, subsonic rumblings become more insidious, particularly for nano-technology applications. With many instruments, such as atomic-force and electron microscopes, cutting down on vibration is essential to collecting good data. "You could spend a million or two million on a microscope and have it rendered useless because of vibration," says Kurt Alberline, an anatomist at the University of Utah School of Medicine, who runs an electron microscopy lab.

When researchers suspect vibration is wreaking havoc on their data, they should identify the origin of the noise or get an environmental engineer to find it, say scientists who regularly deal with vibration. For example, Vicki Colvin, a chemist at Rice University in Houston, noticed images moving around in a circle on her transitional electron microscope. "It was like a ghost," she says. Colvin discovered that an air duct was causing the problem and spent $1.20 on a shield to divert air away from the scope. "The easiest way to get rid of vibrational noise is to stop it at its source." says Larry Cohen, a neuroscientist at Yale University.

The design of a building is critical to the vibration that reaches an instrument, says Ahmad Soueid, senior vice president at HDR Architecture in Omaha, Neb., which has designed more than a dozen nanotech laboratories. Isolating air-handling equipment from laboratories and using special joints that redirect vibration to the ground are some of the fixes his firm uses. Recently, concerns over vibration plagued a $250 million NIH facility under construction in Baltimore. Initial reports indicated the building's quivers could render confocal microscopes useless, although later measurements suggested most instruments will work with proper dampening (www.the-scientist.com/news/display/23495).

There's no universal fix, says David Platus, president of Minus K, a company that makes high-end vibration-isolation tables (see How It Works, p. 76). Solutions vary, from cheap rubber pads that rest under instruments, to the air-cushioned tables that have been around for 50 years, to tables that sense vibration and cancel it out. "The more sensitive the instrument, the better isolation you need." he says.

User: Kurt Albertine, an anatomist at the University of Utah School of Medicine

Solution: Albertine says the best solution for a scanning or transmission electron microscope is to put the machine on at least a one foot-thick slab of concrete. Most EM labs should be on the first floor or in the basement, he says. To further dampen vibration, users can load their microscopes on special dollies with thick rubber feet Albertine recommends consulting with the microscope's manufacturer to find a solution. "They know their instruments, and they know how to optimize them despite a poor environment." he says. 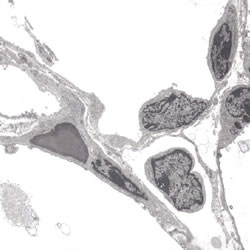 Transmission electron micrographs of lung tissue: A sharply focused image (left) is unacceptably blurred when vibration is not controlled (right).

Problem: Even the slightest shaking can compromise the millisecond-timed measurements.

Solution: Cohen was among the first light microscopists to tackle vibration, beginning in the early 1970s. He started with air tables, which remain the industry standard and cost several thousand dollars, depending on size. The tables dampen up-and-down vibration well, says Cohen, but they have more trouble with side-to-side movements. On the advice of an engineer, Cohen mounted his microscope on top of motorcycle inner tubes resting on an air table. That solved most of the problems, but vibration still got through. He next bought a $5,000 table from Minus K that uses springs and flexors tuned to an instrument's precise weight, and it has solved his problems.

Brian Salzberg, a neuroscientist at the University of Pennsylvania who did a postdoc with Cohen in the 1970s, has gone even further to quell vibration in his lab. "The engineers, bless them, cleverly located all the air-handling equipment on the roof, so the building shakes." he says. As a fix, he rests his microscope on a $10.000 active isolation table produced by Halcyonics. The table electronically senses vibrations then mechanically cancels them out. To dampen vibration transmitted through the air, Salzberg shrouds his set-up in a soundproof curtain. "That combination works very well for us." he says.

Project: While at Bell Labs, Colvin did holography, storing mages and data onto pieces of plastic.

Problem: The lasers encoding the images were extremely sensitive to vibration; slight changes in temperature could compromise the process.

Solution: "As any physical scientist will tell you," Colvin says, "you get your best data in the middle of the night." At 1 a.m. temperatures in the lab steadied, and she was able to conduct her holography experiments in peace.

User: Holger Schmidt, an electrical engineer at the University of California, Santa Cruz

Solution: Schmidt's microscope came with a floating air table that has worked well to stop vibration. AFM users demanding better isolation have been known to place their instruments in pits filled with sand or rubber chips. Another effective solution is to suspend the microscope in the air with bungee cords, says Colvin, who also does atomic-force microscopy at Rice.

User: Stephen Lynch, a chemist at Stanford University who runs an NMR core

Project: Analyzing proteins and other macromolecules on a 600 MHz NMR instrument

Problem: The 14-Tesla magnet in his most powerful NMR is sensitive to even the slightest movements.

Solution: The machine is located in a basement; Lynch cautions against trying to set up an NMR on higher floors. Air-cushioned legs included with the NMR help to stop vibration from reaching the magnet. Slight changes in temperature can also create vibration, says Mark Kelly, who runs an NMR lab at UCSF. Even the sun shining through a window will cause problems, he says.


How It Works:
Passive Vibration Isolation

By Alla Katsnelson
Passive vibrational isolation tables offer the most Vibrational noise reduction for the price. They work on the same basic principle as the suspension of a car - though the wheels move up and down rapidly as you drive over a bumpy road, the spring supporting the mass of the cab keeps passengers from feeling the vertical bounce. Unlike air tables, in which air pumped into the system acts as the spring, and active tables, which use sensors and actuators to electronically correct for positional information, passive isolators are entirely passive, as the name implies.

The idea is simple, explains David Platus, president of Minus K Technology, which manufactures such systems. "A passive isolator can be a piece of cork - as long as it provides a much lower frequency than the frequency of the vibration you want to attenuate." The lower the natural frequency of your isolation system, the lower the frequencies it will be able to cancel; the bigger the gap between your system and the noise it's combating, the better the isolation. (Minus K tables operate at about 0.5 Hz, and start isolating at 0.7 Hz.) Minus K tables combine a stiff spring with a "negative stiffness mechanism," which effectively loosens the spring while maintaining its load supporting capacity. For example, if a 10-pound load would normally deflect the top of the spring downward by an inch, that same deflection might take just a single pound. 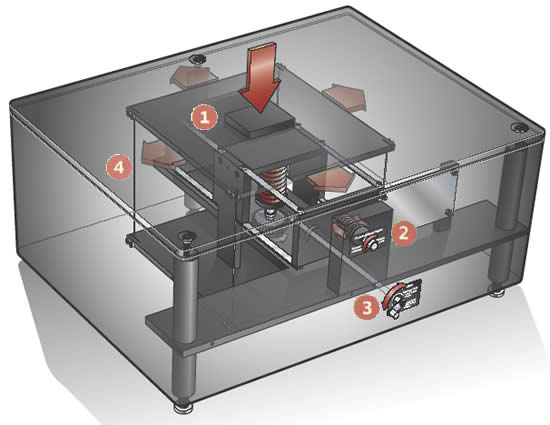 1 - Vertical vibrations are isolated by the spring's interaction with four pairs of flexures. The weight of the instrument compresses the pre-loaded spring, floating the isolator and aligning the flexures.

2 - A squeeze force from another spring, controlled by the knob O. is applied to the outside of the flexures via a screw. The "squeezed" flexures constitute a "negative stiffness mechanism" (NSM) that acts like the negative of a spring, reducing the stiffness of the system.

3 - Four beam-columns connecting an upper and lower column plate act as a horizontal spring to isolate the horizontal motion. The beam-columns are vertically very stiff, but bend slightly in response to horizontal vibration. The weight on the deflected beam-columns reduces the stiffness of the spring, making the system behave like a spring with an NSM.

4 - The crank moves the base of the spring up and down to compensate for changes in the weight of the payload and to keep the flexures in their straight aligned position. If you increase the weight on the spring (by swapping a lighter microscope for a heavier one, for example), its base must be raised by turning the crank clockwise.