The tunable microwave-frequency alternating current scanning tunneling microscope (ACSTM) has opened the possibility of recording local spectra and local chemical information on insulator surfaces, much like the conventional STM has done for metals and semiconductors. Spectroscopy in the microwave frequency range enables heretofore unrealizable measurements on conducting substrates, such as the rotational spectroscopy of a single adsorbed molecule.
Developed in the early 1990s by Prof Paul Weiss, the nano-pioneering Director of the Weiss Group, a nanotechnology research unit of UCLA's California NanoSystems Institute, the ACSTM s single-molecule measurement techniques have illuminated unprecedented details of chemical behavior, including observations of the motion of a single molecule on a surface, and even the vibration of a single bond within a molecule. Such measurements are critical to understanding entities ranging from single atoms to the most complex protein assemblies.

"We use molecular design, tailored syntheses, inter molecular interactions and selective chemistry to direct molecules into desired positions to create nanostructures, to connect functional molecules to the outside world, and to serve as test structures for measuring single or bundled molecules" said David McMillan, lead technician at the Weiss Group. "Critical to understanding these variations has been developing the means to make tens- to hundreds-of-thousands of independent single-molecule measurements in order to develop sufficiently significant statistical distributions, while retaining the heterogeneity inherent in the measurements."

Having learned to measure the precise structures, environments, interactions and functions of molecules at the nanoscale, the group's researchers are now learning to direct molecules into desired positions to create nanostructures, to connect functional molecules to the outside world, and to serve as test structures for measurements of single or coupled molecules.

"The ACSTM enables interactions within and between molecules to be designed, directed, measured, understood, and exploited," added McMillan. "The group examines how these interactions influence chemistry, dynamics, structure, electronic function, and other properties. Such interactions can be used to form precise molecular assemblies, nanostructures and patterns, and to control and to stabilize function. By understanding interactions, function and dynamics at the smallest possible scales, the group hopes to improve synthetic systems at all scales. The Weiss Group is also using these strategies to control and to understand interactions, function, and structures of biological systems"

Understanding ACSTM
The scanning tunneling microscope is based on the concept of quantum tunneling. When a conducting tip is brought very near to the surface to be examined, a bias (voltage difference) applied between the two can allow electrons to tunnel through the vacuum between them. The resulting tunneling current is a function of tip position, applied voltage, and the local density of states of the sample.

Information is acquired by monitoring the current as the tips position scans across the surface, and is usually displayed in image form. STM can be a challenging technique, as it requires extremely clean and stable surfaces, sharp tips, excellent vibration control and sophisticated electronics. For an STM, good resolution is considered to be 0.1 nm lateral resolution and 0.01 nm depth resolution. With this resolution, individual atoms within materials are routinely imaged and manipulated. The STM can be used not only in ultra-high vacuum but also in air, water, and various other liquid or gas ambients, and at temperatures ranging from near xero kelvin to a few hundred degrees Celsius.

While atomic force microscopes can record topographic information on insulating surfaces, very limited chemical and spectroscopic information is obtained. In the ACSTM, electrons are transferred back and forth between the microscope's tunneling tip and the sample surface. In addition to allowing work with nonconductors, the energy and frequency dependences of this transfer process provide chemical information of individual molecular species.The ACSTM probes the chemistry of insulator surfaces using microwaves reflected from the surface, microwave throughput attenuation and harmonics of the microwaves generated by the tunnel junction. It measures photons emitted from the tunneling junction, excited by the tunneling electrons. This gives tremendous gains in spatial resolution, since the photons only come from the atoms or molecules through which electrons are tunneling.

Testing has shown how harmonic amplitudes in nonlinear spectroscopy with the ACSTM can be interpreted in terms of molecular motions, charging and electronic structure. The group has used these nonlinearities to study the electronic energies of insulator-surface states.

The ACSTM is capable of probing the same surface site for days at a time, without drift or contamination, providing data on tunneling conditions over a wide range on the local chemical environment, and on the adsorption site. 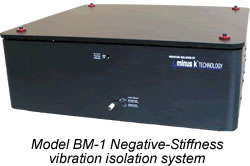 Vibration Isolation
To achieve these nano-level chemical and spectroscopic data sets requires that the ACSTM be positioned in an ultra-stable operating environment, one free of low-frequency vibrations.

"The lab was using almost exclusively optical tables on pneumatic isolation," said McMillan. "One of our big problems has been space constraint. We needed smaller pneumatic optical tables to fit. But as the air tables gel smaller, their vibration isolation performance diminishes."

"Space was not the only issue," continued McMillan. "Our lab was occasionally moved to different locations at UCLA. In 2009, we were located on the sixth floor of a steel-structure building that had significant movement creating low-frequency vibrations. Under these conditions, the pneumatic tables were highly perturbable, and difficult to get vibration isolation and thermal stability. We were not able to functionally run our microscopes using the air tables. So, we began looking for another vibration isolation solution "

"We brought in an active vibration isolation unit to test, as well as a Negative-Stiffness system, explained McMillan, "We compared the two systems, and the Negative Stiffness system performed better with the frequencies of our concern, which were the lower frequencies caused by the movements of the building, between 10 and 24 hertz."

Also known as electronic force cancellation, active vibration isolation uses electronics to sense the motion, and then adds forces electronically to effectively cancel out or prevent it. Some active isolation systems can start isolating as low as 0.7 Hz, But active systems have a limited dynamic range that can be exceeded, potentially causing the isolator to go into positive feedback and generate noise. Although active isolation systems typically have low response at resonance, their vibration transmissibility does not roll off as fast as with Negative-Stiffness isolators. Also, because active systems run on electricity, they can be negatively influenced by problems with the electrical supply available. They also generate heat, which can lead to thermal drift problems in certain applications. 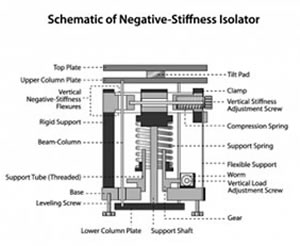 McMillan was originally interested in the Negative-Stiffness isolator because of reports that promised very good low-frequency vibration isolation in a small footprint, making it much easier to locate into a compact box for thermal stability. "I put it on a cyclic accelerometer* and it performed outstandingly" continued McMillan. "Much better than any other vibration isolation we had used before." *(An electromechanical device measures acceleration forces.)

In negative-stiffness vibration isolation, vertical-motion isolation is provided by a stiff spring that supports a weight load, combined with a negative-stiffness mechanism. The net vertical stiffness is made very low without affecting the static load-supporting capability of the spring. Beam-columns connected in series with the vertical-motion isolator provide horizontal-motion isolation, A beam-column behaves as a spring combined with a negative-stiffness mechanism. The result is a compact passive isolator capable of very low vertical and horizontal natural frequencies and very high internal structural frequencies. The isolator provides 0.5 Hz" isolation performance vertical, and 0.5 Hz horizontal, using a totally passive mechanical system - no air or electricity required. (*Note that for an isolation system with a 0,5 Hz natural frequency, isolation begins at about 0.7 Hz and improves with increase in the vibration frequency. The natural frequency is more commonly used to describe the system performance.)

Also, transmissibility with Negative-Stiffness isolators is substantially improved over air systems. Transmissibility is a measure of the vibrations that are transmitted through the isolator relative to the input vibrations. The negative-stiffness isolators, when adjusted to 0.5 Hz, achieve 93 percent isolation efficiency at 2 Hz; 99 percent at 5 Hz; and 99.7 percent at 10 Hz.