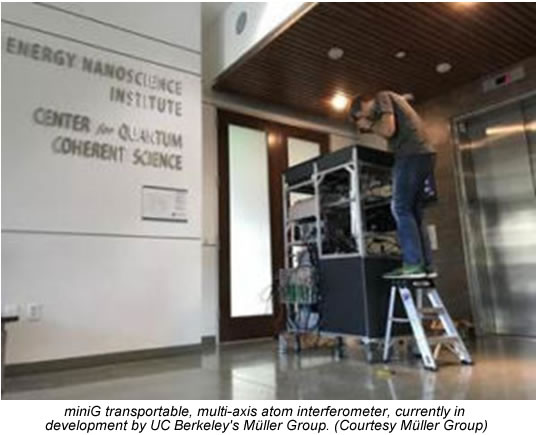 Professor Holger Müller's Group at UC Berkeley is focused on advancing experimental quantum technology to push the sensitivity of experiments to new levels, and to perform precision measurements of fundamental constants. The group’s work uses methods from atomic, molecular and optical physics. One project is the development of a transportable, multi-axis atom interferometer, named miniG.

MiniG was designed to research how quantum interference can be used to measure gravity outside of the laboratory. When cooled to just above absolute zero, the atoms form the focus of a portable quantum gravimeter.

Gravimeters, used to measure gravitational acceleration, have been successfully applied for metrology, geology and geophysics. MiniG uses an atom interferometer to measure the effect of gravity on clouds of atoms that are first trapped and cooled. Interferometry inherently depends on the wave nature of the object. Particles, including atoms, can behave like waves. Atom interferometers measure the difference in phase between atomic matter waves along different paths.

“We use atoms that are laser-cooled to millionths of a degree above absolute zero,” said Xuejian Wu, a post-doctoral scholar, involved in the development of miniG at the Müller Group. “With pulses of light, we drive each atom into a quantum superposition of having been kicked with the momentum of photons, or not kicked. The atoms, in two places at one time, are in a superposition of recoiling backwards or staying still. By manipulating the state of the atoms using one of two types of such light pulses, we steer the matter waves' paths and recombine the matter waves at the end of the experiment.

Atom interferometry has become one of the most powerful technologies for precision measurements, and atomic gravimeters, based on atom interferometry, are extremely accurate and have long-term stability.

Current atom interferometers, however, are too complicated to operate in a miniature package or under field conditions. Berkeley’s mini-G was engineered to resolve this issue.

“In this project, we are developing a mobile atom interferometer using a single-diode laser system and a pyramidal magneto-optical trap,” continued Wu. “This allows the device to be smaller, simpler and more robust than conventional atom interferometers.”

Vibration Isolation
Measurements of atomic precision require isolation from ambient vibrations coming from internal and external sources. As measurements are being done at a smaller and smaller level, those vibrations that are present will start to dominate, and the need for more effective isolation increases.

Although the Müller Group’s research laboratory is situated in the basement of a building on the Berkeley campus, it is still influenced by vibrations from the building’s HVAC system.

“For several years now we have been using Negative-Stiffness vibration isolation for our research projects,” continued Wu.
Negative-Stiffness vibration isolation was developed by Minus K Technology, an OEM supplier to leading manufacturers of scanning probe microscopes, micro-hardness testers and other vibration-sensitive instruments and equipment, such as for testing zero-g simulation of spacecraft. The company’s isolators are used by more than 300 universities and government laboratories in 50 countries.

These vibration isolators are compact, and do not require electricity or compressed air which enables sensitive instruments to be located wherever a production facility or laboratory needs to be located. There are no motors, pumps or chambers, and no maintenance because there is nothing to wear out. They operate purely in a passive mechanical mode.

“We have tried other isolation systems, such as active cancellation, but they have not proved as effective as Negative-Stiffness,” added Wu.

Expanding Horizons for Atom Interferometry
“For our first demonstration of field operation, we drove the miniG atom interferometer around the Berkeley Hills, in California, and measured gravity,” added Wu. Our results show that one should feel lighter by one part per ten thousand, driving from the base to the peak of the hills. We are exploring ideas about applying miniG to geodesy, geophysics, metrology and navigation.”

About the Müller Group, Department of Physics, University of California, Berkeley
Headed up by Professor Holger Müller, the Müller Group’s work is focused on precision measurements of fundamental constants helping to address the great challenges faced by physicists now. For example, how we can find and verify a theory beyond the standard model of particle physics that might eventually unify gravity and quantum mechanics.

The group’s work uses methods from atomic, molecular, and optical physics. It is centered on advancing the experimental technology to push the sensitivity of experiments to new levels, and to perform precision measurements of fundamental constants.