Behind the hulking door, the process to transform the chamber’s interior to match the airless, frigid environment of space began. It took about 10 days to pull the air from the chamber, and then about one month to lower the temperatures of the Webb telescope and its scientific instruments to the levels required for testing. 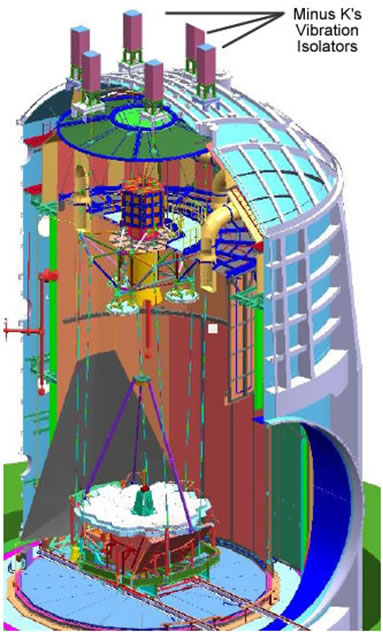 The James Webb Space Telescope is the largest cryogenic instrument telescope to be developed for space flight. The final cryogenic test of the Optical Telescope Element (OTE) and Integrated Science Instrument Module (ISIM) as an assembly (OTE ISIM= OTIS) will be performed in the largest super-cold vacuum test chamber of its kind in the world, Chamber A at Johnson Space Center. The temperature of the Chamber A will continue to steadily drop until it reaches about 20 kelvins (minus 424 degrees Fahrenheit/minus 253 degrees Celsius), but it will take a little while longer for the Webb telescope and its instruments to reach the same temperatures they will be when operating in space. Needless to say, this ultimate test of OTIS, the cryogenic portion of JWST will be crucial in verifying the end-to-end performance of JWST.

In preparation for the Webb telescope’s cryogenic testing, engineers at Johnson have suspended it from the ceiling of the center’s Chamber A. This “hammock” (really, six support rods attached to Minus K Technology’s Negative-Stiffness vibration isolators) is not for relaxation; it’s meant to isolate the telescope from the vibrations Chamber A could produce once the door closes and testing begins, as well as from disturbances that might occur outside the chamber. The telescope needs an arrangement that holds it and its test equipment (an interferometer, auto-collimating flat mirrors, and a system of photogrammetry ‘precision surveying’ cameras already used for tests with a surrogate ‘pathfinder’ telescope) in precise relative alignment inside the chamber while isolated from any sources of vibration, such as the flow of nitrogen and helium inside the shroud plumbing and the rhythmic pulsing of vacuum pumps.

With the telescope suspended, engineers conducted a “push test,” where they gave it a very slight nudge and observed how it reacted to ensure the suspension system was functioning the best it could, said Matthews.

The James Webb Space Telescope is the scientific successor to NASA’s Hubble Space Telescope. It will be the most powerful space telescope ever built. Webb is an international project led by NASA with its partners, ESA (European Space Agency) and the Canadian Space Agency. 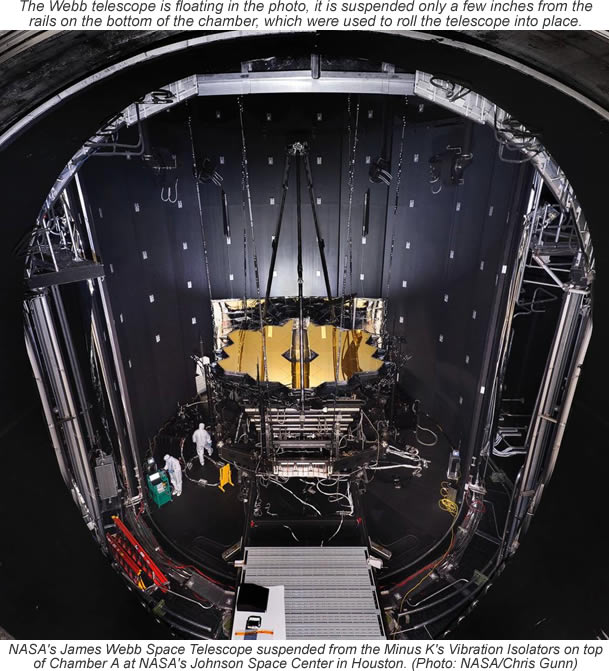 Testing the Webb telescope requires a high vacuum and extremely low temperatures. The telescope also needs an arrangement that holds it and its test equipment in precise relative alignment inside the chamber while isolated from any sources of vibration, such as the flow of nitrogen and helium inside the shroud plumbing and the rhythmic pulsing of vacuum pumps. The engineers installed a massive steel platform suspended from six steel rods (vibration isolators) about 60 feet long (18.2 meters) each and about 1.5 inches (or 38.1 mm) in diameter, to hold the telescope and key pieces of test equipment. 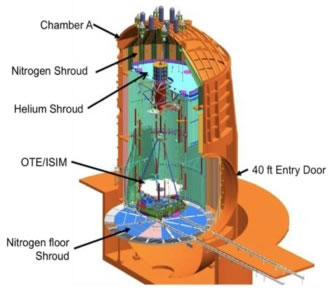 One of the things that was newly constructed and installed in Chamber A was a cold gaseous helium-cooled ‘shroud’ that enables the chamber to reach colder temperatures than it had ever reached before. This addition was necessary because Webb’s telescope and scientific ‘instruments’ (cameras and spectrometers) will operate at temperatures of around 37 Kelvin (K), which is around minus 393 Fahrenheit (F) / minus 236 Celsius (C). Chamber A previously had only a liquid nitrogen shroud inside, and because liquid nitrogen is 77K, you couldn’t get test articles any colder than that. “We added a cold helium gas shroud that we’ve run down to about 11K, which is (minus 440 F/minus 262 C, thus enabling us to get the telescope to its operating regime and even to as low as around 20K to reach ’survival’ temps,” Geithner said.

With the upgrades necessary for testing the Webb telescope finally complete, Chamber A is now the largest high-vacuum, cryogenic-optical test chamber in the world. It is 55 feet (16.8 meters) in diameter by 90 feet (27.4 meters) tall. The main door alone is 40 feet in diameter (12.2 meters), weighs 40 tons, and is opened and closed hydraulically.