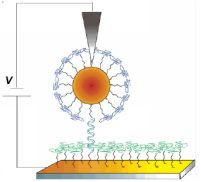 By: Jim McMahon
DNA has been considered as a possibility for molecular electronics. Because DNA is able to recognize other molecules, other strands of DNA, and because it binds together with similar DNA strands in a very unique way scientists have suggested the possibility of using DNA as an electronic circuit without having to build in any other circuitry. The DNA would bind with other similar DNA strands which it recognizes, then use the connecting properties of the DNA to create a self-assembled biological wire for electrical conduction. Until recently, uncertainty existed about whether DNA could conduct at all, and if it could, then how well it could conduct. Scientific speculations ranged from DNA being a superconductor to a complete isolator. Recent research, however, by Dr. Sidney R. Cohen in collaboration with Dr. Ron Naaman and Dr. Claude Nogues of the Weizmann Institute of Science, Scanned Probe Microscopy Unit, in Rehovot, Israel, aided by the enabling technologies of ultra-high-resolution microscopy and negative-stiffness vibration isolation, has shed new light on the electrical transport properties of DNA, focusing on the capacity of single molecules of DNA to transport current along individual strands.

The Weizmann Institute of Science is one of the world's top-ranking multidisciplinary research institutions. Noted for its wide-ranging exploration of the natural and exact sciences, the Institute is home to 2,600 scientists, students, technicians and supporting staff. Institute research efforts include the search for new ways of fighting disease and hunger, examining leading questions in mathematics and computer science, probing the physics of matter and the universe, creating novel materials and developing new strategies for protecting the environment.

DNA Measurement Challenges
Deoxyribonucleic acid (DNA) is a nucleic acid that contains the genetic instructions used in the development and functioning of all known living organisms and some viruses. The main role of DNA molecules is the long-term storage of information. DNA nanotechnology uses the unique molecular-recognition properties of DNA to create self-assembling branched DNA complexes with useful properties.

To measure the electronic properties of DNA, Dr. Cohen and his staff needed to connect a volt electrode to the end of a DNA molecule, which is only a few nanometers in length, using an AFM (atomic force microscope). The difficulty in measuring something this small is ensuring that a good electrical contact is made to the molecule - the researcher wants to measure the electrical properties of the molecule not the quality of the connection. To facilitate this bio-molecular connection, the lab attached a bio-link, a gold electrode, to a single strand of DNA, and then attached a very small gold ball (10 to 20 nanometers in size) to a complimentary DNA strand, after which these two strands were hybridized (linking of the two single strands, aided by genetic similarity between corresponding DNA sequences). If the strands are complementary, their matching cousin on the other strand will form a double-strand. Single strands of DNA do not conduct electricity. The double-strand does conduct for certain configurations, hence the instigation and use of the double-strand in the lab's research.

DNA molecules are very easily destroyed. Hooking up these gold connectors and balls at the nano level without tearing them off or burning them out is quite challenging. This preparation method, developed by Dr. Nogues, is critical and somewhat time consuming, but is a fundamental aspect of this research model.

Using an AFM, with the DNA double-strand displayed on a flat surface, the researchers could then locate the gold ball, put the AFM tip on top of the ball, flow a current through the double-strand and view the current voltage characteristics.

Electron Transport Properties of DNA
"There are two possibilities when we talk about electrons flowing through a DNA molecule," explains Dr. Cohen. "We can break it down into two different kinds of electron transport. One is called a 'tunnelling process', where the electron effectively shoots through the molecule without caring too much about the internal structure of the molecule. The other is called a 'hopping process' where the electron actually resides for small periods of time in certain positions along the molecule. In this case the electron will be affected by temperature."

"DNA consists of a sequence of amino acids," continues Cohen. "We found that variations in both the sequence and the composition of a strand's amino acids can also affect the progress of electron transport through the strand. Similarly, amino acids which are very electron rich have better electron conductivity than those amino acids which have fewer available electrons. This is not solely academic, electronic behavior of DNA is very closely related to function. There are electrochemical processes which are mediated by these DNA biological molecules. For instance, radiation damage and mutation - how does the DNA deal with an extra electron or an absence of an electron located somewhere along its chain?"

The characteristics of electron conductivity in DNA also have implications in molecular electronics - which is trying to achieve devices that, instead of working on the standard silicon circuitry, function through innocuous molecules. Because of DNA's facility to bind with similar types of DNA molecules, it is not necessary to physically place each molecule in a set location. DNA put into solution can be expected to organize itself in the right way and become a predictable medium for electrons.

Vibration Isolation Critical to DNA Research
The Weizmann Institute is one of the few research groups in the world that has actually managed to measure the electrical transport properties of a single molecule of DNA. One of the challenges that presents itself in nanoscale research is vibration isolation. Every laboratory measuring and imaging at the nano-level is dealing with problems of site vibration, which compromises to a greater or lesser degree the imaging quality and data sets which are acquired through ultra-high-resolution microscopy. A critical factor in the Weizmann Institute's ability to consistently measure DNA electron structures at such extreme nano-level resolutions is the lab's use of negative-stiffness vibration isolation systems, developed by Minus K Technology, which produced the ultra-stable environment that the AFMs needed to execute this research.

"Any lab site is subject to vibrations from machines, vibrations of the building itself and even from people walking around, in the range from less than 10 hertz to about 30 hertz," says Cohen. "The lab has three separate AFM systems, each with several different modules that require very precise vibration isolation for all of our research, including our DNA electron transport studies. We have opted on negative-stiffness vibration isolation to provide the necessary low-noise environment."

"We tried air tables but they did not do very well for us with the horizontal vibrations, continues Cohen. "Then we compared active systems to the Negative-Stiffness isolator, measuring the frequency spectrum up to about 100 hertz, and the active systems did not perform as well as the negative-stiffness isolator."

Because they run on electricity, active systems can be negatively influenced by problems of electronic dysfunction and power modulations, which can interrupt scanning. They also have a limited dynamic range - which is easy to exceed - causing the isolator to go into positive feedback and generate noise underneath the equipment. Although active isolation systems have fundamentally no resonance, their transmissibility does not roll off as fast as negative-stiffness isolators.

Leading the Way
The Weizmann Institute conducts original research into many diverse areas, including mechanical properties of materials and biological applications, such as with DNA. The methods for obtaining successful results from its research is a continuing process of improving and refining its protocols, procedures, equipment and systems. Dr. Cohen, together with Doctor Nogues and Doctor Naaman, continue to pioneer and lead the way to a better understanding of the electron transport properties of DNA molecules.


About Dr. Sidney R. Cohen
Dr. Sidney R. Cohen is Senior Staff Scientist and Director of the Scanned Probe Microscopy Unit, Surface Analysis Laboratory for Chemical Research Support at the Weizmann Institute of Science in Rehovot, ISRAEL. He holds a B.A. in chemistry from Reed College in Portland, Oregon, an M.S. in chemistry from the University of California in Berkeley, California, and received his Ph.D. from Feinberg Graduate School at the Weizmann Institute of Science. Dr. Cohen has received wide recognition for his work, and has had his findings published in scores of periodicals. Dr. Cohen can be reached by contacting the Weizmann Institute of Science, Goldwurn Building, Rehovot 76100 ISRAEL; Phone 972-8-934-2703; email sidney.cohen@weizmann.ac.il; www.weizmann.ac.il.

About Minus K Technology, Inc.
Minus K® Technology, Inc. was founded in 1993 to develop, manufacture and market state-of-the-art vibration isolation products based on the company's patented negative-stiffness-mechanism technology. Minus K products are used in a broad spectrum of applications including nanotechnology, biological sciences, semiconductors, materials research, zero-g simulation of spacecraft, and high-end audio. The company is an OEM supplier to leading manufactures of scanning probe microscopes, micro-hardness testers and other vibration-sensitive instruments and equipment. Minus K customers include private companies and more than 200 leading universities and government laboratories in 35 countries.

Dr. David L. Platus is the inventor of negative-stiffness mechanism vibration isolation systems, and President and Founder of Minus K Technology, Inc. (www.minusk.com). He earned a B.S. and a Ph.D. in Engineering from UCLA, and a diploma from the Oak Ridge School of (Nuclear) Reactor Technology. Prior to founding Minus K Technology he worked in the nuclear, aerospace and defense industries conducting and directing analysis and design projects in structural-mechanical systems. He became an independent consultant in 1988. Dr. Platus holds over 20 patents related to shock and vibration isolation.