Abstract: Researchers in the Physics Department of St. Olaf College are using a uniquely designed, integrated nanoindenter-quartz microbalance apparatus to bridge the gap between the fundamental science of friction and the engineering of practical micromechanical systems. This level of micro-research requires extreme stability for the microbalance instrumentation. Since 2001, the lab has used negative-stiffness vibration isolation to achieve a high level of isolation in multiple directions, custom tailoring resonant frequencies to 0.5 Hz vertically and horizontally.

Introduction
Scientists do not fully understand what causes friction and wear between two surfaces at the molecular level. When designing a micromechanical system, the fundamental machine parts of gears, hinges, pistons, gimbals, and suspended beams that flex are included. Basic motions that are the essence of mechanics rely on these materials having durability and low or controllable friction. Mastering these forces that occur on small-scale surfaces of micromachines is a considerable challenge. When the mechanical parts are very small, their properties are dominated by minute surface forces that macroscopic machines are not sensitive enough to detect. This raises entirely new questions about how to maintain minute components and to keep them moving and protected from wear or breakage. 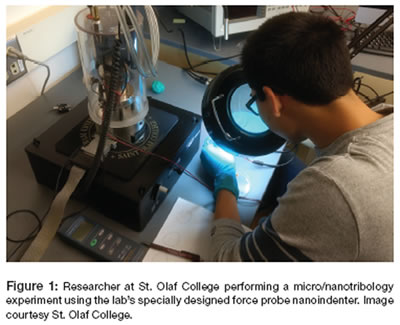 Silicon Uniformity
Engineers have relied on extremely thin lubricant films to reduce friction and to keep parts moving inside tiny silicon-constructed microelectromechanical systems (MEMS). But these films have not been sufficiently effective in micromachines, which rely on relatively fast-moving parts that
are in contact with each other, such as gears, gimbals, and pistons. Since the early 1980s, with the introduction of the first micromechanical machines, the vision has been to batch-fabricate these devices as silicon chips to link with circuitry that can be connected wirelessly. However, these small silicon
machines often disintegrate after just a few hours of operation. This technology has, for some time, been struggling to make it to the marketplace. Decades of research in both academia and business has been undertaken to understand friction and wear well enough at these micro- and nano-scales to effectively lubricate and provide wear protection.

New Research Methodology
Professor Brian Borovsky, Associate Professor in the Physics Department at St. Olaf College in Northfield, MN, has been researching micro/nanotribology for over two decades [1–4]. He has pioneered friction research as applied to very tiny micromechanical machines, having developed
state-of-the-art instrumentation and a process that tests frictional properties of surfaces coated with ultrathin lubricants. His is one of the few labs that can measure friction of micromachine surfaces sliding past each other at very high speeds that approach 1m/s [1]. 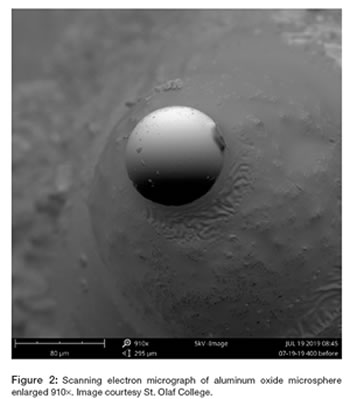 While equipped with scanning electron (SEM) and atomic force microscopy (AFM) for analysis of surfaces, the lab’s focus instrumentation is a specially designed force probe nanoindenter in conjunction with a quartz microbalance ( Figure 1).

The integrated nanoindenter-quartz microbalance is a unique apparatus unlike what is found in other laboratories dedicated to studying friction. The lab has custom-integrated two different tribology systems into one instrument. Essentially, it has taken a Bruker (Hysitron) TriboScope® indenter probe and integrated this with a Quartz Crystal Microbalance. The indenter probe is equipped with a 50 µm microsphere ( Figure 2) of aluminum oxide (silicon) that is loaded onto a surface that oscillates laterally back and forth under the probe’s tip at very high speeds of 5 million times per second (Figure 3).

The resonant frequency and quality factor of the quartz crystal changes upon contact of the tip with the surface. These changes are determined as functions of oscillation amplitude at a fixed normal load. The increase in the frequency of the quartz is used to determine static friction. The decrease in quality factor in the quartz is used to determine kinetic friction. Because the quartz crystal oscillates at 5 million times per second, it is easily able to achieve speeds and differentials comparable to the fastest micromachines [2,3]. 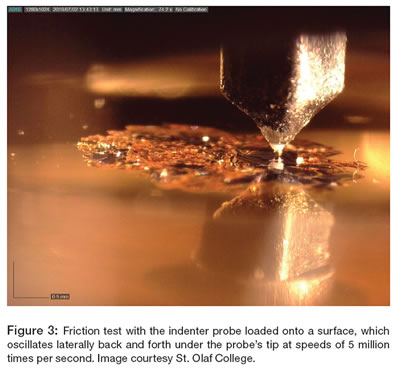 Vibration Isolation
This level of micro-research requires extreme stability for the nanoindenter-quartz microbalance instrumentation. Since 2001, the lab has used negative-stiffness vibration isolation exclusively for all of its micro/nanotribology work, including for support on its main test rig and AFM system. Negative-stiffness

vibration isolators (Minus K Technology, Inglewood, CA) are compact and do not require electricity or compressed air, which enables sensitive instruments to be located wherever a production facility, laboratory, or observatory needs to be set up, whether that be in a basement or on a building’s vibration-compromised upper floors. There are no motors, pumps, or chambers, nor any maintenance because there is nothing to wear out. They operate purely in a passive mechanical mode (Figure 4).

A primary advantage of negative-stiffness isolators is that they achieve a high level of isolation in multiple directions. These isolators have the flexibility of custom tailoring resonant frequencies to 0.5 Hz vertically and horizontally (with some versions at 1.5 Hz horizontally). For an isolation system with a 0.5 Hz natural frequency, isolation begins at 0.7 Hz and improves with increase in the vibration frequency. The natural frequency is more commonly used to describe the system performance. Vertical motion isolation is provided by a stiff spring that supports a weight load, combined with a negative-stiffness mechanism. The net vertical stiffness is made very low without affecting the static load-supporting capability of the spring. Beam-columns connected in series with the vertical-motion isolator provide horizontal-motion isolation. A beam-column behaves as a spring combined with a negative-stiffness mechanism. The result is a compact passive isolator capable of very low vertical and horizontal natural frequencies and very high internal structural frequencies.

Negative-stiffness isolators deliver very high performance, as measured by a transmissibility curve. Vibration transmissibility is a measure of the vibrations that are transmitted through the isolator relative to the input vibrations. Negative-stiffness isolators, when adjusted to 0.5 Hz, achieve approximately 93% isolation efficiency at 2 Hz; 99% at 5 Hz, and 99.7% at 10 Hz.

Although the lab’s facilities have few external vibrations that could influence its experiments, as with any laboratory, it is subject to vibration influence from HVAC systems, elevators, doors opening and closing, and even footfall near the instrumentation, which will negatively impact experiments at this level of sensitivity.

Continuing Research
With participation from major corporations into continuing research for friction solutions to micromechanical systems, Prof. Borovsky and St. Olaf College are precisely positioned at the center of this research endeavor. The lab’s work is motivated by the promise of micromechanical systems. Micromechanics could have influence in virtually every aspect of our lives, similar to microelectronics. There are many institutions and researchers devoted to unraveling the mysteries of friction wear on these small devices. Step by step, Prof. Borovsky’s lab is making forward progress.