The Moulé Group, at the University of California/Davis, is interested in the solution processing and patterning of organic electronic materials for use in devices such as light-emitting diodes, photovoltaics, transistors, thermoelectric, and chemical sensors. The Group specifically focuses on using structural and dynamic measurement techniques to quantify the effects of solution processing and patterning on material morphology and device architecture.

Tucker Murrey, a doctoral candidate and published author with the Moulé Group, is actively involved with researching and designing a scalable optical patterning process for organic photovoltaic applications.

"Most working organic devices consist of several layers of material, each having a specific optical and/or electronic function," said Murrey. "One universal design constraint for complicated device architectures, like organic field-effect transistors (OFETs), organic photovoltaics (OPVs) and red-green-blue organic light-emitting diode (OLED) displays is that they require multiple components patterned laterally and vertically to operate. Currently, many of these components are comprised of non-flexible inorganic materials. In order to move towards flexible, all organic electronic devices, there is a need to develop high precision vertical and lateral patterning methods that are compatible with solution processing.

Immense efforts in the plastic electronics field have led to unprecedented progress and continuous improvements in organic photovoltaic (OPV) performance.

"Given that conventional photolithography technology techniques are incompatible with polymeric semiconductors, there is a critical need to develop scalable photopatterning methods capable of laterally patterning organic semiconducting compounds with sub-micromometer resolution," added Murrey. "This patterning process would enable the construction of a sophisticated OPV architecture designed to increase external quantum efficiency."

Polymeric semiconductors combine many of the electrical properties of inorganic semiconductors with the mechanical flexibility and chemical processability of organic materials, such as enabling them to be deposited from solution over large areas, greatly reducing production costs compared to conventional metallic semiconductors. Developments like this have motivated a rapid increase in demand for low-cost, high-throughput, and high-resolution fabrication techniques.

Organic semiconductors are non-metallic materials that exhibit semiconductor properties, whose building blocks are polymers made up of carbon and hydrogen atoms. These conductive polymers are, essentially, electrical insulators, but become conducting when charges are either injected from electrodes or by photoexcitation, or doping – the intentional introduction of impurities into an intrinsic semiconductor for the purpose of modulating its electrical, optical, and structural properties.

"Over the past year I have been upscaling an optical patterning process that our group developed to make micro-scale electronic devices with these materials," expressed Murrey. "The overall pattern area was limited to less than one square millimeter. Now we are trying to upscale the overall patterning area to about one square centimeter."

Murrey designed a unique lab-scale photolithography system, modifying a Leica DM2700 optical microscope, swapping out its LED illumination source to permit a high-powered (Class 4) 405nm diode laser to be projected through it. Built into the system is a laser beam expander, collimating lens, and an optical speckle remover. 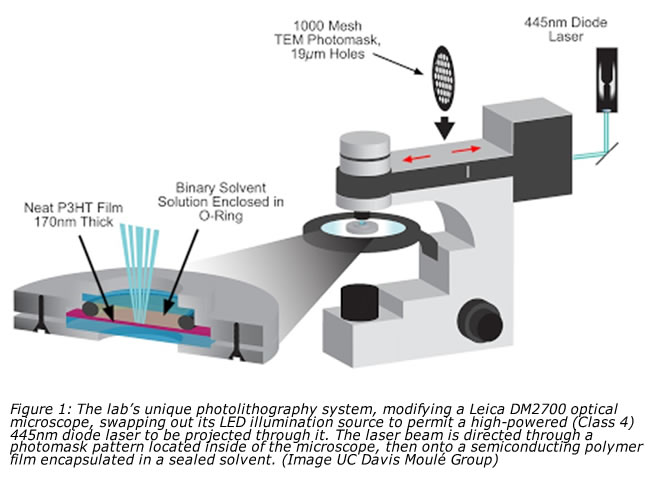 The laser beam is directed through a photomask pattern located inside of the microscope, then onto a semiconducting polymer film. The film is encapsulated in a sealed solvent cell containing tetrahydrofuran ((CH2)4O) to maintain solvent thickness, and to keep potentially hazardous solvents from leaking. Light is projected through the mask, then focused down onto the film using the objective lens.

The photomask consists of glass with chrome deposits in a specific pattern. The microscope moves the chrome mask into its image path so that it is in focus with the microscope's optics. When the laser beam is passed through it projects the image of the photomask onto the polymer film, selectively heating the film above the dissolution temperature of the polymer and patterning the film.

"The idea is to create a light-trapping architecture in the film. The patterned features are currently sized at about 4 microns," explained Murrey. "We are currently testing to get below one micron."

But this has proved challenging, in no small part because of vibration limitations.


Influence from Vibrations
Vibrations influencing sensitive micron-level instrumentation can be caused by a multitude of factors. Every structure is transmitting vibrations from internal and external sources. Within the building itself, the heating and ventilation system, fans, pumps, and elevators are just some of the mechanical devices that create vibration. Depending on how far away sensitive instrumentation is from these vibration sources, and wherein the structure the equipment is located, will determine how strongly the equipment will be influenced.

External to the building, the equipment can be influenced by vibrations from adjacent road traffic, nearby construction, loud noise from aircraft, and even wind and other weather conditions that can cause movement of the structure.

"Our lab is located on the third floor of a building on the UC Davis campus," said Murrey. Aside from a number of exhaust hoods which create vibration, students and faculty moving around in the building and doors slamming in hallways creates minute vibrations that interrupt our experiments."

"Anything that could vibrate the optics or the laser system while the pattern of the photomask is recorded on the film would blur the image," added Murrey. "We would not be able to record fine features, and certainly not at one micron and smaller. Working at these micron and sub-micron levels our necessity for vibration isolation became critical for our optical patterning systems."

Negative-Stiffness vibration isolation was developed by Minus K Technology, an OEM supplier to leading manufacturers of scanning probe microscopes, micro-hardness testers, and other vibration-sensitive instruments and equipment, such as for testing zero-g simulation of spacecraft. The company’s isolators are used by more than 300 universities and government laboratories in 50 countries.

These vibration isolators are compact and do not require electricity or compressed air which enables sensitive instruments to be located wherever a production facility or laboratory needs to be located. There are no motors, pumps or chambers, and no maintenance because there is nothing to wear out. They operate purely in a passive mechanical mode.


Performance
The results of the Negative-Stiffness isolator have proved very positive for the lab. "In use for over a year now, we have not had any of our experiments interrupted by vibration issues," said Murrey. "We needed the vibration isolation table to isolate our optical patterning system, and enable us to bring our micron-level research to the next level."


About the Moulé Group, Department of Chemical Engineering & Materials Science,
University of California, Davis
The Moulé Group is interested in the solution processing and patterning of organic electronic materials for use in devices such as light-emitting diodes (LEDs), photovoltaics (PVs), transistors, thermoelectric, and chemical sensors. The Group specifically focuses on using structural and dynamic measurement techniques to quantify the effects of solution processing and patterning on material morphology and device architecture.

Dr. David L. Platus is the inventor of Negative-Stiffness isolators, and President and Founder of Minus K Technology, Inc. (www.minusk.com). He earned a B.S. and a Ph.D. in Engineering from UCLA, and a diploma from the Oak Ridge School of (Nuclear)Reactor Technology. Prior to founding Minus K Technology he worked in the nuclear, aerospace and defense industries
conducting and directing analysis and design projects in structural-mechanical systems. He became an independent consultant in 1988. Dr. Platus holds over 20 patents related to shock and vibration isolation.