When Saul Sokolsky of The Audio Enthusiast in Palos Verdes, California, called me up and told me that he had just heard an audio device that was like no other he had ever heard, and that I had to hear it, but he couldn't tell me what it was, my first thought was, "Oh no, not another audio device. How many things does the audiophile world need, and what are we still without? How many more truly significant improvements can be made, and how many 'improvements' have already been relegated to the dustbin of history?" But Saul told me how impressed he was with this device, and inveigled me to get myself forthwith to his home-cum-dealership, noting that I wouldn't be sorry. And he was right. But I'm getting ahead of myself...

Dr. David Platus is President of the company Minus K Technology in Inglewood, California. He manufactures leading-edge vibration isolation platforms that are intended to all but eliminate building and ground vibrations for applications in which very sensitive analytical techniques are being used. Typical applications include those in which measurements are being made on the sub-atomic level. One of the primary applications is to atomic force microscopes (AFMs), which are reportedly achieving their lowest noise level ever when isolated with the Minus K platforms. The world's leader in AFMs has reportedly now built a Minus K platform into one of their instruments. The Institute for Human Brain Research in Sweden is reportedly using Minus K products in their highly sensitive low-voltage fluorescent die imaging, which currently measures neural activity in the brains of animals. A company that wants to suspend and isolate a 10,000 lb granite slab has reportedly come to Minus K for help, which their web site shows they can readily provide. And like the Vibraplane, Minus K platforms are also used under electron microscopes.

SPACE AGE TECHNOLOGY
But the application that most impresses me is that the Jet Propulsion Lab here in Pasadena is using three of David's platforms to isolate its 4300 lb Space Interferometry Mission (SIM) test structure. This spacecraft is intended to use a technique called optical interferometry to measure the distances between objects in deep space with unprecedented precision. The technique makes use of spaced optical elements whose relative position and orientation must be known with nanometer precision. The Minus K device was the only isolator in existence that met the specifications for the dynamics test structure, which was built by TRW.

A FIRST LOOK
Upon entering Saul's home, I met Dr. David Platus, and was somewhat startled to meet his doppelganger, whom I was introduced to as his twin brother, Daniel. David proved to be a very engaging, serious, and obviously quite capable individual. He unveiled a modified version of his "Small Biscuit" vibration isolation platform, which has a top plate dimension of 16.2" X 16.2", a height of 8.5", and a weight of 60 lbs. The natural frequency of this unit is adjustable down to 0.5 Hz, both horizontally and vertically, which is a quite impressive number. When adjusted to a frequency of 0.5 Hz, vibrations both vertical and horizontal at 5 Hz are attenuated by a factor of approximately 100. Ballast weights needed to be placed on the top, because the turntable we used in this audition was lighter than the minimum intended load. This is neither an active device nor an air flotation device. Its isolation is achieved purely by mechanical means, and it uses a principle called "negative stiffness" (hence the company name Minus K).

used in industry for the measurement of small displacements, refractive index changes and surface irregularities. They deliver the ultimate in high accuracy, and repeatable and traceable measurement. When built into inspection equipment, like a coordinate measuring machine (CMM), a laser interferometer system reports the surface condition of a product with more accuracy than any other method. Such a precision laser-position measurement system allows users to improve product quality and reliability, and increase manufacturing consistency and production yields.

In many manufacturing sectors, the standard method for checking tolerances on machined part surfaces, using laser interferometry, is to sample a small fraction of parts out of a production run, and measure them for accuracy. A manufacturer may be producing, for example, 100,000 common parts per year for an automotive or aerospace application, but only sampling approximately one out of every 500 parts for surface measurement inspection. This system of intermittent testing has proven itself over the years to be an acceptable method for verifying quality in machined parts. 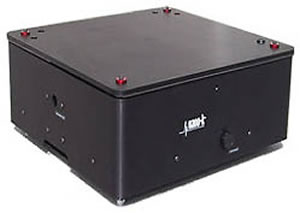 David and his brother ministered to the unit for a bit, until it would "float" properly with the intended mass of turntable and ballast weights. In this initial audition, the Small Biscuit (as seen above) was used only under the turntable, and it served as the prototype of what may one day be a product customized to the audiophile market. As set up for this session, the vertical frequency was < 0.5 Hz, and the horizontal frequency was 1 Hz. The standard production Small Biscuit was modified for the purposes of this test to have stiffness in the yaw direction (rotation about the vertical axis), since yaw movements are undesirable in a turntable. (Incidentally, his was a manually-adjustable unit. On the Minus K web site, you'll also see servo-system-controlled units.)

The associated equipment used in this test consisted of an Immedia RPM 2 turntable with a Clearaudio linear tracking arm, a Transfiguration Spirit cartridge, a Herron tubed preamp, tubed monoblock amps by Bill Chater, and the Nestorovic Reference Epsilon loudspeakers, the ones that make liberal use of concrete inside the cabinets. Bill Chater, for those of you who don't know him, is widely recognized for his tubed electronics designs that have appeared for years in the pages of Audio Amateur, and now its follow-on publication. He is also a violin maker par excellence. The listening room at The Audio Enthusiast is large and comfortable, and is well suited to testing audio components, with a wide range of equipment to choose from.

LISTENING...
Please note that this was only a preliminary audition. In order to expedite our listening session within the time available, we listened to the unit "floating", and then we listened to it "locked down", still in place under the turntable. The right way to perform such an audition is, of course, with the unit floating, and then with the unit removed entirely. This proved to be so labor intensive, particularly with regard to setting the turntable back up, that we chose to expedite the process. Although it is true that the sound with the unit locked down and in place may have been worse than that with the unit removed entirely, the differences we heard in the test as it was conducted were so startling, and the sound of a record that I consider to be essentially an absolute reference was so outstanding, that I felt compelled to report on this preliminary listening session. The next session will be done properly, albeit likely with a lot more grunting and swearing. This will be with a modified Standard Biscuit, which has a top plate dimension of 24" x 22.5".

For this audition, we used the Classic Records reissue of Dave Brubeck's Time Out (the "Take Five" cut, 33 rpm version), the Sheffield direct-to-disc recording of Harry James' The King James Version, and the Chesky Records reissue of Rimsky-Korsakov's Scheherazade. The differences heard with the platform floating and locked down were indeed startling, and after a few back-and-forth trials, they were always quite obvious from the first note. With the platform floating, instruments sounded much more like real instruments in a real acoustic space with real air around them. They sounded harmonically more pure, and tonally right. Transparency and the ability to see into the soundstage were greatly increased. I think it's fair to say that those of us listening, including my friend Joe Knight, were rather stunned with the difference. David Platus seemed to be quite pleased with the various superlatives that we were hurling off in his direction.

But the greatest differences came in terms of bass response. I am extremely familiar with the Classic Records reissue of Time Out, having heard it on a variety of systems. And the acoustic bass on "Take Five" has always sounded plummy to some degree, sometimes more, sometimes less, but never as fleshed out as I thought it should be. With the Minus K platform in place, I felt like I was hearing the acoustic bass line and the drums on this record for the first time. The acoustic bass sounded like a bass for the first time in my experience, and the drums were really fleshed out, with phenomenal detail. This unmistakable improvement was quite unexpected, and really grabbed our collective attention. Saul Sokolsky, who is also very familiar with this record, concurred that he had never heard it sound nearly this good. So although the test methodology was not perfect, I feel that this record provided a known reference for bass reproduction in absolute terms.

CONCLUSION
Time will tell, but my preliminary impression is that this product, when adapted to our marketplace, may become the best audiophile vibration isolation product out there, bar none. It has tremendous potential for use under turntables, tubed electronics, CD transports, and many other kinds of equipment, in my humble opinion. Remember, you heard it here first.

David has a lot of work to do to convert the prototype to a consumer unit, and he has to bring it in at an acceptable price. First, the height of 8.5" is too high for audio applications. Second, it could benefit from more intuitive controls. Third, it needs to be modified to handle the wide range of turntable/tube amp/CD transport/etc. weights that will be encountered. Finally, there is cost. As you might imagine, these babies ain't cheap, but the standard manually-adjusted units are not horribly expensive either, by high-end audio standards. Producing a product whose price will be within the acceptable range is an issue, but I think that David Platus is up to the challenge. And if he succeeds, I plan to ensure that Enjoy the Music.com will be there to bring it to you first.