By Jim McMahon, instrumentation technology writer
The need for precise vibration isolation with scanning probe microscopy (SPM) and nearfield scanning optical microscopy (NSOM) systems is becoming more critical as resolutions continue to bridge from micro to nano. Whether used in academic labs or commercial facilities, SPM and NSOM systems are extremely susceptible to vibrations from the environment.

Enabling more complex optical measurements
Lately, the introduction of integrated microscopy systems employing multiple scopes is enabling more complex optical measurements, but these systems are also much heavier, and there has been little vibration-isolation technology available for such heavy instrumentation. Air tables, which have been liberally used for optics applications, are not ideal for these nano-scale resolution systems because of their inability to effectively isolate vibrations below 20 Hz. Nor can active systems be used with these newer combination systems because of their inability to handle heavy instrumentation. 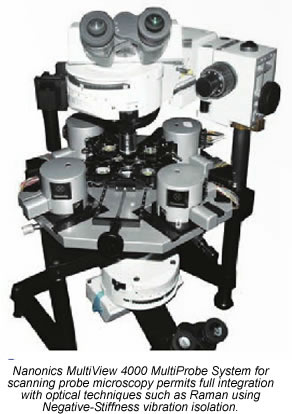 The integration of AFM with micro-Raman enables a sizable improvement in data correlation between the two techniques, and expanded Raman measurement and resolution capabilities. Micro-Raman is a spectroscopic NSOM technique used in condensed matter physics and chemistry to study vibrational, rotational and other low-frequency modes in a system.

It relies on scattering of monochromatic light-usually from a laser in the visible, near-infrared or near-ultraviolet range. The laser light interacts with phonons or other excitations in the system, resulting in the energy of the laser photons being shifted up or down. The shift in energy gives information about the phonon modes in the system.

Scanning samples in a micro-Raman system, however, entails problems. As a sample is scanned, even a very flat sample, it is hard to keep the lens-to-sample distance constant. As one goes from pixel to pixel under the lens of a Raman, a mixture of sample and air is sampled in the illuminated voxel (volumetric picture element).

This causes "artifactual" intensity variations in the Raman that are unrelated to the chemical composition of the sample and standard methods of auto-focus are simply not accurate enough for a whole host of problems that are being investigated today. Additionally, the point spread function, which determines the resolution of the Raman image, is significantly broader where there are contributions from the out-of-focus light and this reduces resolution.

The atomic force microscope, a very high resolution type of scanning probe microscope, has demonstrated resolution of fractions of a nanometer, making it one of the foremost tools for imaging, measuring and manipulating matter at the nano scale. The information is gathered by "feeling" the surface with a mechanical probe. Piezoelectric elements that facilitate tiny but accurate and precise movements on electronic command enable the very precise scanning.

Most systems employing AFM plus Raman execute the two types of scans independently. The recently developed direct integration of Raman spectroscopy with AFM technique, however, has opened the door to significantly improved technique and sample analyses.

Micro-Raman is a micro-technique, but when AFM is added, it becomes a nano-technique. It allows the AFM structural data to be recorded on line and improves the resolution of the Raman information when the nanometric feedback of the system adjusts, with unprecedented precision, the position of each pixel of the sample relative to the lens. The small movements of the AFM stage also provide oversampling: a well-known technique for resolution improvement.

One integrated AFM-Raman system developed by Nanonics Imaging Ltd. (in association with major Raman manufacturers such as Renishaw plc, Horiba JY and others) provides simultaneous and, very importantly, on-line data from both modalities. This advantage addresses critical problems in Raman-including resolution and intensity comparisons in Raman images-while permitting on-line functional characterization such as thermal conductivity, elasticity and adhesion, electrical and other properties. It also provides for new avenues of improved resolution including AFM functioning without optical obstruction, parallel recording with Raman in a wide variety of scanned probe imaging modalities enabling direct and simultaneous image comparison and analysis, and high-resolution Raman mapping. 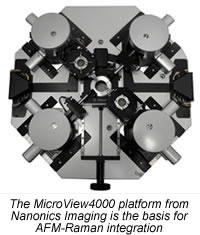 "Another aspect of optical integration is that SPMs can measure forces, but they cannot measure distribution of light in micro-lasers, silicon-based wave guides, fluorescently stained biological materials, etc. For example, there are many important advances occurring in the application of photonics to silicon structures and plasmonic metals. In the past, these photonic structures were in the micrometer range; now they are nanometric."
The Nanonics platform can be used for structural and photonic characterization, as well as the structural and chemical characterization that is available with AFM and Raman integration.

For these applications, Nanonics Imaging is the innovator of AFM and NSOM systems, including dual tip/sample scanning AFM systems; the industry's first NSOM-AFM cryogenic systems; integrated Raman-AFM systems; and multi-probe AFM and SEM-AFM systems. The company also holds patents to the largest range of unique nano-probes.

Negative-stiffness vibration isolation
The Nanonics MultiView AFM-NSOM microscope, with its free optical axis on a standard micro-Raman, now makes it possible to truly integrate the separate worlds of Raman and AFM/NSOM nanocharacterization, which has led to a new era in high-resolution Raman spectroscopy.

Facilitating this integration is not only the geometry of the AFM/NSOM platform but also a new generation of AFM glass probes that have very unique characteristics - such as hollow glass probes with cantilevered nano-pippets for material deposition, probes with glass surrounding a single nano-wire in the middle for ultrasensitive electrical measurements. or dual wire glass probes for thermal conductivity and thermocouple measurements. Glass probes are ideal for Raman integration because of their transparency to laser light and no Raman background.

They also expand outward allowing unprecedented correlation of Raman and AFM, also permitting multiple probes to be brought easily together, which is very difficult with a standard AFM.

The result is a compact passive isolator capable of very low vertical and horizontal natural frequencies and very high internal structural frequencies. The isolators (adjusted to 1/2 Hz) achieve 93% isolation efficiency at 2 Hz; 99% at 5 Hz; and 99.7% at 10 Hz.