NASA’S Ice, Cloud and Land Elevation Satellite-2 (ICESat-2), which lifted off three years ago, has generated a comprehensive portrait of the complexities of ice sheet change and insights into the future of Greenland and Antarctica. The ICESat-2 measurements, when compared to the measurements taken by the original ICESat from 2003 to 2009, showed that in Antarctica the ice sheet is getting thicker in parts of the continent's interior, likely as a result of increased snowfall. But the massive loss of ice from the continent's margins (due to ocean warming) far outweighs any small gains in the interior.

"The new analysis reveals the ice sheets' response to changes in climate with unprecedented detail, revealing clues as to why and how the ice sheets are reacting the way they are," said Alex Gardner, a glaciologist at NASA's Jet Propulsion Laboratory."


Measuring by space lasers
ICESat-2 spacecraft serves as a power and pointing platform for the mission's single instrument, the Advanced Topographic Laser Altimeter System, or ATLAS. It is a space-based LIDAR (Light Detection and Ranging), which measures distances by illuminating a target with a laser and analyzing the reflected light. ATLAS measures the travel time of laser photons from the satellite to Earth and back; computer programs use the travel time from multiple pulses to determine elevation.

ATLAS required us to develop new technologies to get the measurements needed by scientists to advance the research," said Doug McLennan, ICESat-2 Project Manager. "That meant we had to engineer a satellite instrument that not only will collect incredibly precise data, but also will collect more than 250 times as many height measurements as its predecessor."

As it circles Earth from pole to pole, ICESat-2 will measure ice heights along the same path in the polar regions four times a year, providing seasonal and annual monitoring of ice elevation changes. Beyond the poles, ICESat-2 will also measure the height of ocean and land surfaces, including forests.

As ICESat-2 orbits, ATLAS generates six green laser beams arranged in three pairs to better determine the surface's slope and provide more ground coverage. Each beam pair is 2.1 miles apart across the beam track, and each beam in a pair is separated by 1.6 miles along the beam track. The laser array is rotated 2° from the satellite's ground track so that a beam pair track is separated by about 300 ft. ATLAS emits visible laser pulses at 532 nm wavelength. Though powerful, the laser is not hot enough to melt ice from its vantage point some 300 miles above the Earth.

The laser pulse rate combined with satellite speed results in ATLAS taking an elevation measurement every 28-in., akin to taking 130 images of a single football field. Measurements are taken every 2.3-ft along the satellite's ground path.

The laser fires at a rate of 10,000 times a second. Each pulse sends out about 200 trillion photons, almost all of which are dispersed or deflected as the pulse travels to Earth's surface and bounces back to the satellite. About a dozen photons from each pulse return to the instrument and are collected with a 2.6-ft beryllium telescope. The instrument's filters ensure that only photons with a wavelength of 532 nm are counted, and computer programs further identify photons likely to have come from the laser. 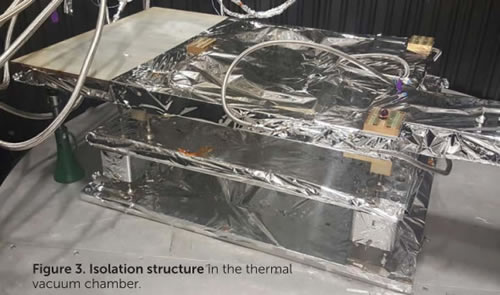 Ensuring ATLAS can last
ATLAS went through an initial round of testing in the spring and summer of 2016 at NASA's Goddard Space Flight Center as it was being assembled. The testing team jolted it on a vibration table, blasted it with sound to simulate a noisy rocket launch, then put it in a vacuum chamber to test it in both extreme heat and extreme cold temperatures.

While ICESat-2 is in orbit, it goes from basking in the heat of the sun to freezing in Earth's shadow every 90 minutes. So before launching the satellite into the harsh environment of space, Goddard engineers wanted to make sure that the laser instrument worked consistently day and night, whatever the temperature.

The vacuum chamber was configured with four vacuum compatible 800CM-1CV negative-stiffness vibration isolators to support the ATLAS instrument for the thermal vacuum testing. "The Minus K isolators' primary use was inside the thermal chambers which did not have as stable of a mounting surface as we would have liked," said Brian Simpson, mechanical lead for ATLAS testing. "The isolators were critical in cancelling out jitter introduced into our system by the facility." 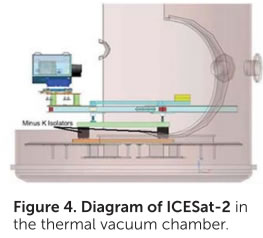 The ICESat-2 team worked around the clock to test ATLAS in a temperature-controlled vacuum chamber at Goddard, ensuring that its interconnected components worked together and functioned as expected. "When we did these tests, we wanted to confirm that in the worst-case conditions on orbit, both hot and cold, with no air, you still get the expected performance that you want from the instrument," said Melody Djam, system engineer at Goddard. "It's an extreme test."

For the test, engineers calculated how hot the instrument will get on orbit either in full sun or in Earth's shadow — then went 5° C beyond that to cover all bases in a "survival" test. With liquid nitrogen and heaters, the thermal vacuum then cycled four times between 55° C and -25° C.

At each of those maximum or minimum temperatures, test engineers sent laser signals through a specially designed fiber optic cable that simulates laser light bouncing off Earth and returning to the spacecraft. The science team had designed different scenarios that reflect light in different ways — a glacier in summer, for example, results in different photon returns than a forest in fall or an ocean under cloudy skies. And the instrument also must tell the difference between laser photons that it needs to count, and the static of background photons from natural sunlight. Plus, this must be done under the different temperatures that could cause materials to expand or contract.

Specifically-designed ground support equipment, or test fiber optics and lasers simulated all these scenarios, testing not only how the ATLAS detectors and electronics perform, but how the computer programs that will receive the data on Earth interpreted those returns.

"Because our integration and testing process is so long and involved, and because there are so many electronic interfaces, we really wanted to get most of those electronics together in the thermal vacuum tests to see how they all behaved," said Cathy Richardson, ATLAS instrument project manager at Goddard. "Problems that we might find during testing, we wouldn't have otherwise found for another year. It's a significant risk mitigator for us."

"We really needed to see how everything plays off each other," Richardson said. "What you care about is the flight hardware working together." And the avionics system performed well, she said, returning data that correlated with what the scientists expected to see.

Mapping subglacial lakes
ICESat-2 has allowed scientists to precisely map subglacial lakes. The satellite measures the height of the ice surface, which, despite its enormous thickness, rises or falls as lakes fill or empty under the ice sheet.

Hydrology systems under the Antarctic ice sheet have been a mystery for decades. Scientists have hypothesized subglacial water exchange in Antarctica results from a combination of factors, including fluctuations in the pressure exerted by the massive weight of the ice above, the friction between the bed of the ice sheet and the rocks beneath, and heat coming up from the Earth below that is insulated by the thickness of the ice. That is a stark contrast from the Greenland ice sheet, where lakes at the bed of the ice fill with meltwater that has drained through cracks and holes on the surface.

Precise measurements of basal meltwater are crucial if scientists want to gain a better understanding of Antarctica's subglacial plumbing system, and how all that freshwater might alter the speed of the ice sheet above or the circulation of the ocean into which it ultimately flows.

In 2007, Helen Amanda Fricker made a breakthrough that helped update classical understanding of subglacial lakes in Antarctica. Using data from the original ICESat, Fricker found for the first time that under Antarctica's fast flowing ice streams, an entire network of lakes connect with one another, filling and draining actively over time. Before, these lakes were thought to hold meltwater statically, without filling and draining.

Recently, Fricker and another team of scientists explored this connection between freshwater and the Southern Ocean — but this time by looking at lakes near the surface of an ice shelf, a large slab of ice that floats on the ocean as an extension of the ice sheet. Their study reported that a large, ice-covered lake collapsed abruptly in 2019 after a crack or fracture opened from the lake floor to the base of Amery Ice Shelf in East Antarctica.

With data from ICESat-2, the team analyzed the rugged change on the landscape of the ice shelf. The event left a doline, or sinkhole, a dramatic depression of about four square miles (about 10 square kilometers), or more than three times the size of New York City's Central Park. The crack tunneled nearly 200 billion gallons of freshwater from the surface of the ice shelf into the ocean below within three days.

During the summer, thousands of turquoise meltwater lakes adorn the bright white surface of Antarctica's ice shelves. But this abrupt event occurred in the middle of the winter, when scientists expect water on the surface of the ice shelf to be completely frozen. Because ICESat-2 orbits Earth with exactly repeating ground tracks, its laser beams can show the dramatic change in the terrain before and after the lake drained, even during the darkness of polar winter.

Meltwater lakes and streams on Antarctica's ice shelves are common during the warmer months. And because scientists expect these meltwater lakes to be more common as air temperatures warm, the risk of hydrofracturing could also increase in coming decades. Still, the team concluded it is too early to determine whether warming in Antarctica's climate caused the demise of the observed lake on Amery Ice Shelf.

Witnessing the formation of a doline with altimetry data was a rare opportunity, but it is also the type of event glaciologists need to analyze in order to study all of the ice dynamics that are relevant in models of Antarctica.
"We have learned so much about ice sheet dynamic processes from satellite altimetry, it is vital that we plan for the next generation of altimeter satellites to continue this record," Fricker said.

The new study provides critical insight for spotting new subglacial lakes from space, as well as for assessing how this hidden plumbing system influences the speed at which ice slips into the Southern Ocean, adding freshwater that may alter its circulation and ecosystems. This has allowed scientists to improve their maps of these hidden lake systems under the West Antarctic ice sheet, as well as discovering two more of these active subglacial lakes.