For integrators selling high-end audio systems or to audiophiles, explaining vibration isolation can open up a potential upselling opportunity for vibration isolators for turntables, tube electronics or CD players. 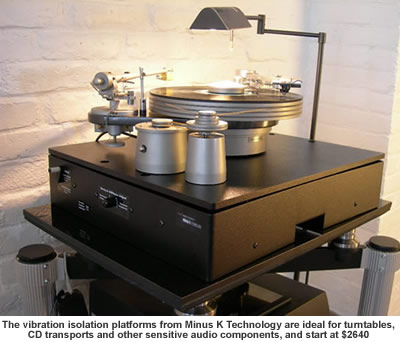 The re-emergence of analog-based audio and two-channel music brings upselling opportunities for CE pros catering to audiophiles, who are constantly seeking improvements to their systems: better turntable cartridges, tone arms, furnishings, etc. Because of the impact of external vibrations play in the sound quality produced by turntables, tube amps and even CD players within high-end audio systems, there's also a chance for intergrators to talk about - and familiarize themselves with - vibration isolation.

Vibration isolation in the playback process is crucial to experiencing high-quality audio. Any external vibration, no matter how slight, even someone walking near the turntable or vibration from floor-mounted speakers, is sensed by the turntable’s stylus and affects the sound being played back from the record.Capacitors, resistors, transistors and other electronic components used in many audio systems are likewise sensitive to vibration.

With recorded discs, sound waveforms are captured in the disc grooves with microscopic undulations. The turntable’s cartridge and stylus trace these minute wave forms, play them back with very sensitive low voltages and convert them into an audio signal. This is how the sound captured in the record grooves is reproduced -but this process is extremely sensitive to movement and vibration.

Vibrations in the range of 2 Hertz (Hz) to 20,000 Hz will influence the sound reproduction in audio systems. Vibration within this range can be caused by a multitude of factors. Every structure is transmitting noise. Within the home or building itself, the heating and ventilation system, fans, pumps and elevators are just some of the mechanical devices that create vibration. Depending on how far away the audio system is from these vibration sources, and where in the structure the audio system is located, whether on the third floor or in the basement, for example, will determine how strongly the sound quality will be influenced.

“People who care about sound quality – such as audiophiles, musicians and recording engineers – can have very strong, subjective preferences about what constitutes good sound,” says Eric Jacobs, president of The Audio Archive, which provides consulting and audio transfer services to digitize, restore and preserve sound recordings from a wide array of current and obsolete analog media formats.

“Some people like resonances in their system that emphasize particular frequencies, so they will insist, for example, that their equipment must rest on a maple wood support because it has a certain resonance to it that makes the sound more appealing to them. Others, particularly those engaged in audio restoration or archival work, want to experience sound as the mastering or recording engineer intended it, without further coloration," he adds.


Enter Negative-Stiffness Isolators
“Most manufacturers of high-end turntables recognize that external vibration is a problem, and will go to great lengths to minimize it in their turntable designs,” says Jacobs. “Quality turntables, for example, are built with superb platter bearings to minimize rumble..."They often incorporate high-mass platters that are designed to increase speed stability and reduce flutter. They might use exotic materials to dampen vibrations without deadening the sound. Tone arms have their own set of vibration and resonance characteristics which manufacturers attempt to isolate from the audible frequencies through geometry, localized vibration isolation and damping. Turntable designers go through this elaborate process to try and eliminate vibration throughout the entire turntable playback structure.”

High-end turntables are also sometimes factory-equipped with built-in vibration isolation supporting the entire unit. But for the majority of high-end turntables that are manufactured without factory-installed vibration isolation, third-party air-based vibration isolators have become a popular accessory. These systems typically have a vibrating power pump to supply air, with a tank that holds the pressurized air and delivers steady pressure to the isolator. The noisy pump is usually located outside of the room that has the audio equipment, and the air hoses are run over to the tank and isolating platform.

“Air systems are usually a less than optimal set-up,” explains Jacobs. “They do achieve some isolation, but we have found that like most of the mechanical audiophile vibration isolation devices, they provide limited isolation performance. They do isolate some – usually in one dimension (vertically) with limited horizontal isolation – but they do not isolate to the extent that is really needed at very low resonance frequencies.”

Several years ago, The Audio Archive began an extensive search for better vibration isolation systems to facilitate the sound reproduction services that it provides to its clients, including some of the world’s leading archives, libraries and record labels.

“Having thoroughly tested systems available to the audio market and generally been unsatisfied, we then looked outside of the audio world and conducted an in-depth search of industrial vibration isolation systems,” says Jacobs. “We learned about negative-stiffness vibration isolation, which was being used to eliminate vibrations in ultra-sensitive atomic force microscopes, and in nanotechnology labs where objects are literally built one molecule at a time. As we learned more about negative-stiffness isolators, the more interesting it seemed for audio vibration isolation.”

Vertical-motion isolation is provided by a stiff spring that supports a weight load, combined with a negative-stiffness mechanism. The net vertical stiffness is made very low without affecting the static load-supporting capability of the spring. Beam-columns connected in series with the vertical-motion isolator provide horizontal-motion isolation. A beam-column behaves as a spring combined with a negative-stiffness mechanism. The result is a compact passive isolator capable of very low vertical and horizontal natural frequencies and very high internal structural frequencies.

“What is very advantageous about negative-stiffness isolators is that they achieve a high level of isolation in multiple directions,” Jacobs says. “Not just vertically, which is very important for audio systems to isolate against footfall, but also in all horizontal directions. The horizontal direction is often overlooked because horizontal building vibrations that are transmitted to the turntable are less obvious.”


Improvements in Transmissibility
Vibration transmissibility with negative-stiffness isolators is substantially improved over air systems, which can make vibration isolation problems worse since they have a resonant frequency that can match that of floor vibrations. Transmissibility is a measure of the vibrations that are transmitted through the isolator relative to the input vibrations. The negative-stiffness isolators, when adjusted to 0.5 Hz, achieve 93 percent isolation efficiency at 2 Hz; 99 percent at 5 Hz; and 99.7 percent at 10 Hz.

“Negative-stiffness isolators work with audio systems in two ways,” continues Jacobs. “One, they cancel out large vibrations, what we refer to as footfall. If a turntable is set up on anything other than a concrete slab floor or other large inert mass, then every time someone walks in the vicinity of the turntable, the vibrations from their footsteps are transmitted through the floor to the support stand and into the turntable, and finally show up in the recording. People will literally tiptoe around their audio playback systems, but the playback process is so sensitive that it will still pick up footsteps in the hallways or rooms some distance away. And two, the negative-stiffness isolators block out building vibrations in the higher audible frequencies.”

“And then there is the sound, which is what really matters most to our clients,” continues Jacobs. “With negative-stiffness isolators there is a sense of harmonic rightness. Instruments sound much more like real instruments, and voices sound like they are in a real acoustic space, with real air around them. The ability to “see” clearly into the entire three-dimensional soundstage is greatly enhanced. Improvements in rhythm and pace are captivating. Negative-stiffness isolators truly represent a significant advance in sound quality for high-end audio.”


PDF version of this article